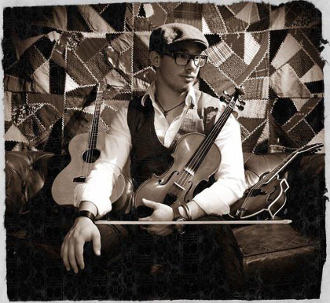 Folk roots with a modern twist.

Local farmers markets were the stage for eleven year old Benjamin Rogers‘ first live performances. Since then Ben’s passion for the art has continued to drive him to play his music wherever there are people who want to hear it.  He constantly seeks ways to  further explore East Coast and Old Time roots while pushing the boundaries of traditional folk music.

Utilizing his skill on guitar, mandolin and fiddle, Benjamin creates a warm sonic bed upon which his home-spun voice lays wonderfully modern lyrics.

In 2014 at the Summerfolk Music Festival the judges recognized Ben’s unique appeal, awarding him with the Youth Discovery award.
Further accolades came from the 2015 International Songwriting Competition where he made it to the semi-finals with three of his songs:

Wayfarer, Benjamin’s debut EP, was nominated for Young Performer of the year for the 2014 Canadian Folk Music Awards.
The album is a blend of comforting lyrics and driving fiddle that being the listener on an audio tour of the East Coast, contemporary while still faithful to the style of the past.