Many thought the music scene would never recover when we lost the ford plant. While it may be true that it can never be the same, in the last decade Brantford has continued to grow into an epicentre of awesome music.  Lots of great venues showcase weekly (and sometimes daily!) live music, and now it looks like we’ll finally be getting our own festival (wtfest what!what!)

Comment below and let us know what you miss about the old scene, and what you love about the Brantford music scene today!

Before we get to the music, just want to take a moment to remember Quiet Riot-er and Ozzy Ozborne shredder; rock god Randy Rhoads.  March 19th, 1982 we lost a rock great.  His music continues to resonate over 30 years later.

Wonderful photo from ‘The Rhoads Family Archives’
Along with a message from Kathy & Kelle
Please be Respectful by Keeping the Watermark VISIBLE & INTACT
“Three decades after Randy’s passing; it’s interesting to try and speculate what he would think of the attention he continues to receive. With two records of internationally acclaimed musicians “Immortal Randy Rhoads” and “Randy Rhoads Remembered”, and a North American tour planned for summer 2015; he remains in the public consciousness.
Then, there are the legions of his fans that continue to sing his praises and influence future fans and guitar players. This level of fame and accomplishment is not something you can plan on, it happens to a very precious few. Maybe if he was around today, he wouldn’t think about his situation too much. Instead, he would do what he always did. He would just play his guitar.
We are happy to share a picture of Randy that has never before seen. It is truly amazing to think that he is so truly beloved after all these years! Amazing that 33 years later, so many still are so incredibly smitten by his music, and his “sweet, kind soul!” God bless! And long live the LEGEND!!
Sincerely,
Kathy Dargenzio-Rhoads and Kelle Rhoads” 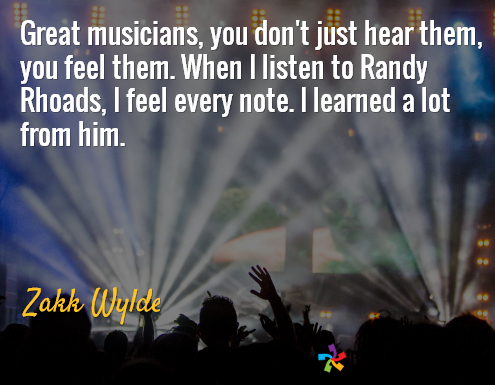 Great musicians, you don’t just hear them, you feel them.

Check the full calendar of events or the latest posts for more upcoming events!